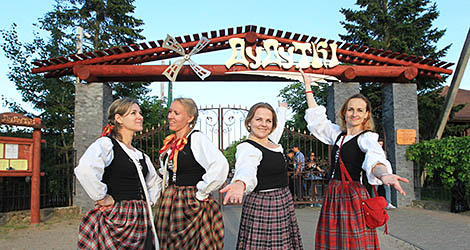 From robbery and wars, the Scots sought salvation overseas. The British playwriter John Webster, in his creation “The White Devil”, noted in the 17th century that at least 40 thousand “sheets” (as the Lithuanian highlanders were called) lived in the Grand Duchy of Lithuania. They were patronized by tycoons. Sheets found support from the princes Janusz and Boguslav Radziwills. Other aristocrats also took care of the Scots. https://charter97.org/ru/news/2020/3/29/371213/

Gradually, the Scots were assimilated by the local population, adopting traditional names and surnames. This is how the Presbyterian community of Scots appeared in the city of Slutsk, and the register of Pinsk merchants (1620s) lists 4 Scots: Tomilo Oleshkovich, Pyotr Shimkovich, Oleshko Okhremovich and Lutsya Litvinovich.

Interestingly, the first small coin, which became the most widespread in the lands of the Grand Duchy of Lithuania, was the double Scottish penny.

To this day, women in Belarus often wear skirts that are recognizably tartan and a popular musical instrument in Belarus is the Duda, which is remarkably similar to the Highland bagpipes. https://staryolsa.com/en/instruments/belarusian-bagpipe

According to reporters, few people knew that the Scots had the most direct relation to the Belarusian history and the Radziwill family.

The website states: “On our lands the Scots appeared as far back as the 16th century, and, in addition, brought with them the first coin.”

Scots once played a real part in its history – the first coins in the country were brought by Scots immigrant soldiers who set up thriving communities in the 17th century. To this day, women in Belarus often wear skirts that are recognisably tartan and a popular musical instrument in Belarus is the Duda, which is remarkably similar to the Highland bagpipes.

Reading the encyclopedia of the Grand Duchy of Lithuania, one can find that the Scots for the history of Belarus are not such a distant people. We called them “sheets” or “shots”. Back in 1503, Petrkovsky Soym considered the possibility of settling Scottish colonists in castles on the banks of the Dnieper, devastated during the war with Moscow in 1500-03. In the course of the 16th century, sheets of sheets increasingly appeared in the Grand Duchy as mercenaries or as peaceful small traders. In the second capacity, already in 1563, the Diet constitutions mention the sheets as serious competitors for local merchants and impose additional taxes on them. Despite this, the Scots soon monopolized trade in certain categories of small goods, such as combs, needles, threads, stockings, brooms, knives, thimbles, etc. Being Calvinists by religion, the sheets settled mainly in cities and towns, which belonged to the Calvinist magnates. Especially large colonies existed in the 17th century in the cities of the Calvinist branch of the Radziwill family: Slutsk, Kopyl and Keidanakh. According to the memoirs of P. Gordon’s sheet, Janusz and Boguslav Radziwills maintained a “company” entirely or predominantly from Scots. Scottish mercenaries also participated in the wars of the Polish-Lithuanian Commonwealth with Russia on both sides, sometimes moving from one side to the other several times. The sheets that settled on our land were gradually assimilated by the local population, taking traditional Belarusian names and surnames. So, for example, in the register of Pinsk merchants (1620s) 4 sheets are listed: “Tomilo Oleshkovich; Petr Shimkovich; Oleshko Okhremovich; Lutsya Litvinovich ”.

So, it’s not surprising if someone in the family suddenly has some MacLeods …

All posts by tec

In 1996, Ales Biely wrote regarding the origin of Belarusian bagpipes “[I]t’s hard to say exactly where did bagpipes come from. They appeared here about the 16th century and it might well have been Scots who brought them.” The quote is from
Auld Guid Ruce (White Russia): The Amazing Parallels Between Belarus And Scotland
available at pravapis.org/art_scotland_belarus.asp

The very interesting information there is that the most popular (the oldest they say about – the end of 19th-beginning of 20th century) pattern was red and black cells. Thus, if we here in America want to wear a “Belarusian tartan” it would be primarily a red and black cells shirt/andarak.

Of all Scottish clan tartans, these colors (red and black) correspond to:
Brodie, Cunningham, Macqueen, Munro, Ramsay, Wemyss, and Wallace (whose most famous member was the Scottish patriot William Wallace of the late 13th and early 14th centuries).

In the past, Scottish women did wear checkered skirts.

This site uses Akismet to reduce spam. Learn how your comment data is processed.

With Belarus at a democratic crossroads, the World must stand together in support of the democratic aspirations of the Belarusian people. One of the simplest ways to directly help people at home and abroad is to donate funds or volunteer your time to our organization.
Make A Difference. Donate Now. You Can Help Change Lives.